Serving The Straits Area Sportsmen Since 1975

The U.S. Fish and Wildlife Service is providing double-crested cormorant management and rulemaking updates during two 90-minute webinars. The sessions, which are equivalent and will cover the same information, will begin with a brief presentation by Service staff followed by a question/answer period.

Registration is on a first-come, first-served basis and limited to 500 participants per webinar.

From the Michigan United Conservation Clubs Blog by Charlie Booher

The U.S. Fish and Wildlife Service (USFWS) recently finalized a rule that would facilitate the lethal take of nearly 120,000 double-crested cormorants annually nationwide.  This rule comes as the latest action in a year’s long process to manage cormorants more comprehensively. To read the entire MUCC article click here.

An Environmental Impact Statement (EIS) is a document that evaluates and discusses potential environmental impacts that would occur as a result of an agency taking action. It details the process through which a project is developed, includes consideration of a range of reasonable alternatives, analyzes the potential impacts resulting from the alternatives, and demonstrates compliance with other applicable environmental laws and executive orders. The EIS also informs the development of the draft rule, which will also be developed during this timeframe.

The Service will publish the draft EIS and draft rule for public review and comment. As part of the process, agencies identify and invite the participation of interested people. A draft EIS is published for public review and comment for a minimum of 45 days. This means the public has an opportunity to comment on the scope of the environmental review at the beginning of the process, and again on the draft before a final EIS and final rule is issued.

A final EIS is then published, which responses to substantive comments. A Notice of Availability is published in the Federal Register, announcing the availability of both draft and final EISs to the public.The EIS process ends with the issuance of the Record of Decision (ROD), which is the final rule. The ROD explains the Service’s decision, describes the alternatives considered, and discusses any plans for monitoring, if necessary.

Upon the close of the comment period of the draft EIS and draft rule, the Service will consider all substantive comments and, if necessary, conduct further analyses. The Service will then prepare a final EIS, which informs the development of the final rule. 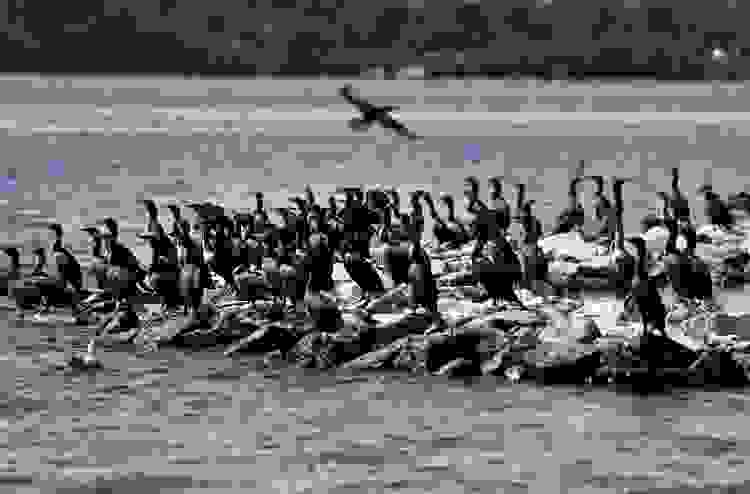 As one of the first non-government organizations to be approved by the U.S. Fish and Wildlife Service to begin the Cormorant Harassment program on Brevort Lake.  The SASC works closely with USFWS and the Michigan DNR the SASC has been working to control the number of Cormorants that attempt to inhabit Brevort Lake and the surrounding area.


Each spring after ice-out SASC Members begin to harass Cormorants to chase them off of the lake where they have had a devastating effect on the fish population of Brevort Lake.


May 26, 2016, a Federal Judge ruled the “Depredation” Orders for Double-Crested Cormorants Rescinded Immediately. Since then Club Members still harass only the cormorants they observe on Brevort Lake.


The Straits Area Sportsmen's Club is currently lobbying federal agencies and Congressmen to change this ruling.

To Learn More About Comorannts

The Eastern U.P. is a major nesting are for the Double Breasted Cormorants with its many island and lakes.

If you are interested in hunting, fishing, trapping or have other outdoor interests the Straits Area Sportmen's Club is for you.  For membership information check our Website or email  us (sasc764@gmail.com)..

The Straits Area Sportsmen's Club meets the 3rd Monday of each month at 7:30 pm in the Masonic Building, 12 N. State St., St. Ignace. Stop in to see what we are doing.